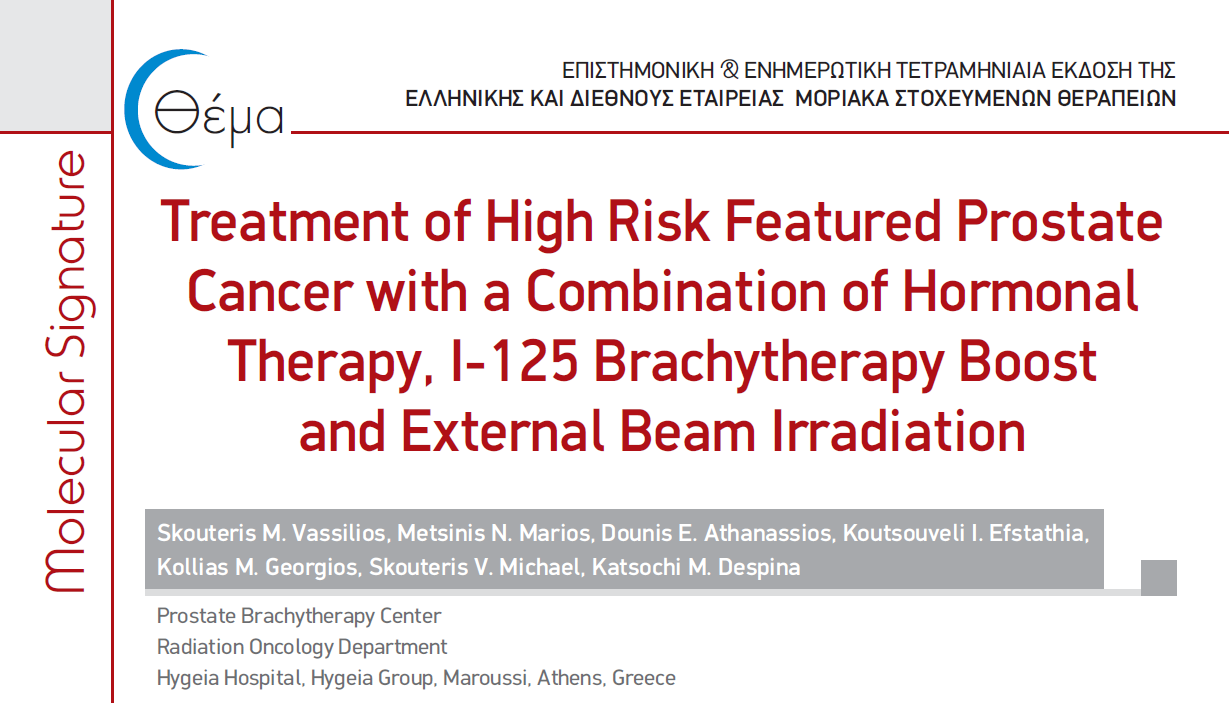 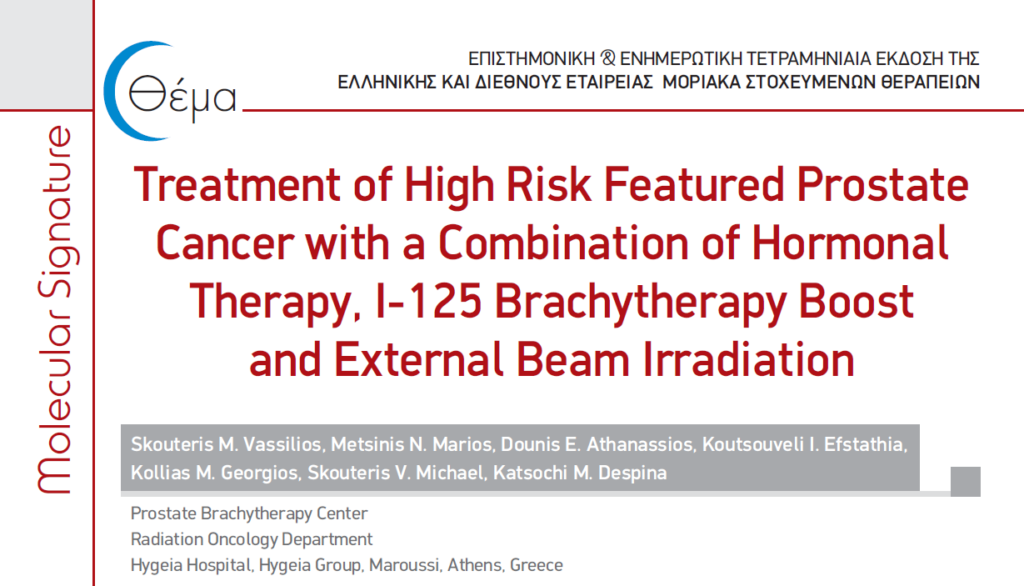 Prostate brachytherapy has long been proved a reliable treatment option for prostate cancer. Its wide acceptance by patients is due to low morbidity and excellent treatment outcomes from the procedure. Long term data from many centers confirm early impressions that this minimally invasive treatment modality is as valid as radical prostatectomy (RP) or external beam irradiation (EBRT) in treating localised prostate cancer [1, 2, 3, 17].

The management of high risk patients though, still remains a significant treatment challenge. Most of prostate brachytherapy practice has been in men with low risk prostate cancer and patients presenting with high PSA, Gleason score or clinical stage are usually been treated with RP (open, laparoscopic or robotic) or EBRT with long-term hormonal therapy (HT). But RP patients with the above mentioned aggressive disease often have positive margins necessitating the need for adjuvant EBRT [4, 5]. Also EBRT group patient’s quality of life is seriously impacted by long term androgen deprivation [2, 9].

The group of physicians at Icahn School of Medicine at Mount Sinai has developed a method of managing these advanced cases by a combination of hormonal therapy, partial brachytherapy implant and supplemental conformal EBRT. The purpose of the brachytherapy boost is to greatly increase the total biological effective dose (BED) of irradiation to the tumor volume without increasing the risk of radiation related morbidity and the purpose of the HT is to lower down prostate size and treat possible extracapsular extension often associated with these tumors [6, 7][8, 9].

Prostate Brachytherapy Center in Hygeia Hospital started offering seed implants (preplan or “Seattle” technique) [1] to patients with prostate adenocarcinoma in 1998. In 2000 the initial technique used was switched to Real Time, applied to low risk patients as monotherapy and to high risk ones combined with HT and EBRT [8, 17].

All patients underwent bone and CT scan for staging. Those with a positive scan were excluded from the study. Most also had biopsy of the seminal vesicles (SVB) which was performed under transrectal ultrasound guidance in the operating room (OR) prior to the onset of the seed implantation, with three cores taken from each seminal vesicle [10]. Patients with a positive SVB were kept under HT (LHRH-a) for a total period of two years.

Brachytherapy technique used was the Real – Time interactive seed implantation as previously described by Stone and Stock [18]. This technique, also called the “nomogram method”, uses a nomogram table in order to find the proper amount of activity to be implanted. The planning of this method is done in the OR and doesn’t rely on a preplan [1]. Seeds are placed mainly in the periphery (75% of total activity) according to the principles of Paterson and Parker [11] in order to avoid urethral and rectal hot areas. The remaining 25% is placed in the interior for coverage of base and apex of the gland. Prostate volume is measured in the urologist’s office and used for the seed order. Prostate is measured again (step section planimetry every 5mm) at the beginning of the case and re-measured after needle placement. Average prostate length is also determined by three longitudinal measurements. These values are loaded in the computer software (VariSeed 6.7, 7.0, 7.2 and 8.0, Varian, Palo Alto, Ca) operated by the physicist in order to calculate the total amount of needles and seeds as well as the spacing between them. The seeds are inserted by the radiation oncologist in the OR, using a Mick applicator (Mick TP 200, Mick Radionuclear Instruments, Mount Vernon, NY, USA) under continuous ultrasound monitoring (B&K Leopard, model 8558 probe, B&K Medical, Winthrop, Mass) in longitudinal imaging that allows for immediate adjustment of seed placement.

At the end of implantation and before discharging the patient from the OR a dynamic cystogram was performed by a C-arm (movie loop) with contrast material [12]. This excluded the possibility of seeds placed in urinary bladder or in urethra. If seed was found in the bladder a cystoscopy was performed to remove it (4/302 patients or 1.3%).

One month after completion of the implant, patients were submitted to CT scan of pelvis for calculating the doses received by prostate, urethra and rectum (postimpant dosimetry) [13]. This study determined the exact number of sessions and total dose of supplemental EBRT (prescription dose 45Gy) needed in order to achieve the highest possible BED (200-220 Gy) to prostate and seminal vesicles, while simultaneously the lowest to the normal surrounding tissues and organs. High BED calculated from the post-implant prostate D90 and the EBRT dose has been proven to be the main factor predicting the outcome especially in high risk patients [14, 15, 16, 17]. EBRT 5-week course started two months after seed implantation in daily 1.8Gy fractions and was delivered by linear accelerator 18MV using conformal techniques. 122 patients (2000 – 2006) were treated with intensity modulated radiotherapy (IMRT) and 173 (2006 – 2013) with image guided radiotherapy (IGRT).

Follow up included PSA, DRE and quality of life assessment (urinary and rectal) every 3 months for the first year, every 6 months till 5th postoperative year and yearly after. The majority of the patients were followed in our clinic and around 10% were contacted by telephone for follow up.

We used two different definitions of failure, if PSA ≥ 0.5 ng/ml and the ASTRO definition of three consecutive PSA rises above a nadir.

Trimodality regimen of HT, brachytherapy boost and conformal EBRT offers excellent results with low morbidity to the patients. This is mainly due to high BED dose delivered and continuous intraoperative control of rectal and urethral radiation doses that can highly be achieved by the Real Time method of seed implantation.